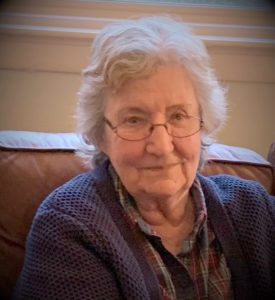 Joan K. Fischer, 75, passed away peacefully at her home in Reinholds, PA on May 6, 2022, after a lengthy cancer battle. Joan leaves behind her adoring husband of 54 years, Rick; her daughter, Amanda, wife of Matthew Robertson, of Monrovia, Maryland; her dog, Molly; and her granddog, Gordon. Joan was preceded in death by her son, Daniel, in 2017.

Following her college graduation, she was employed as a mathematician in the Fuel Element Development department at Westinghouse Bettis Atomic Power Laboratory in West Mifflin, PA. During her tenure at Westinghouse, Joan authored and published several papers on the performance of fuel rods in nuclear reactors for the U.S. Atomic Energy Commission.

After the birth of her first child, Joan opted to become a stay-at-home mom and the family moved to Denver, PA in 1973. She began offering piano lessons and continued with this passion for 45 years. In 1980, Joan was elected Township Auditor for East Cocalico Township, and then Township Tax Collector in 1983. She served in that capacity for 35 years until her retirement.

When her children were enrolled in the Cocalico School District, Joan served as Treasurer of the Reamstown PTA, the Cocalico High School Band Boosters and Wrestling Boosters. She also served for 15 years as Choir Director at Saint Paul’s Evangelical Congregational Church in Reamstown, as well as an Adult Class Sunday School teacher.

In her free time, Joan enjoyed freelance writing, having had stories, columns, and articles published in Redbook magazine, Conservative Digest, and several online political publications, including The Patriot Post. Joan was an avid gardener and loved putting her hands in the dirt, creating and maintaining beautiful, extensive gardens around her and Rick’s home. She loved nature and wildlife, and enjoyed vacationing in Big Timber, Montana, and Belgrade Lakes, Maine. Many of her fondest memories were created while hiking, swimming, and enjoying the natural beauty of these areas with her family.

Joan will be missed terribly, but her memory will live on in the hearts and actions of her family, friends, and the countless lives she touched.

In lieu of flowers, the family requests donations be made in Joan’s memory to these organizations: Johns Hopkins Kimmel Cancer Research – https://secure.jhu.edu/form/Kimmel and Operations Paws for Homes (OPH) dog rescue – https://ophrescue.org/donations/new.