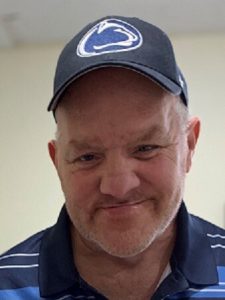 Kevin Howe, age 57, of West Jefferson, North Carolina, passed away Friday, August 6, 2021 at Johnson City Medical Center. Kevin was born in Ephrata on March 21, 1964 to Larry Howe and Norma Weaver. He was preceded in death by his mother, Norma Weaver.

Kevin was a North Carolina resident for the past 30 years, but always had special ties to his hometown of Ephrata.

Kevin was a friend to everyone he met and was famous for his love of all sports and Wendy’s Frosties! He loved his Dallas Cowboys and all women’s sports, but especially his Tennessee Lady Vols. Kevin was a member of several local fire companies and worked at many of the restaurants in the area. Kevin loved his dog Sofie, southern gospel music and Jesus with all of his heart. He was a wonderful son, brother and friend.

He was a proud graduate of Ephrata Senior High School and he will be deeply missed by his 1983 classmates, who fondly called him “Kevin Buddy.” Many classmates will miss his phone calls updating them on his Wendy’s Frosty count (over 1,000 in his lifetime!) or asking “when’s our next reunion?” One couldn’t help but smile and laugh when he was around, because he loved to make people smile!

Randy Gockley, a long-time member of Lincoln Fire Company, shared the following about Kevin: “Kevin was a great “cheerleader” for the Lincoln Fire Co. He could not be an active firefighter, but taking a ride in one of our apparatus or helping around the station doing clean-up and support functions pleased him greatly and members of the company considered him “one of us.” Riding his bike and making the sound of a siren was understood by all to be Kevin’s way of being a firefighter.”

Kevin is survived by his father, Larry Howe (Susie Winstead), and his sister Kim Howe (Kathy Crawford), all of Columbus.

A memorial service to celebrate his life will be held on Saturday, August 21, 2021 at 3:00 p.m. at Ashelawn Memorial Chapel by Rev. Wade Huntsinger. The family will receive friends following the service.

If you feel inclined to do so, please make a donation in Kevin’s honor to your local fire company or one of his beloved fire departments: Lincoln Fire Co., 38 S. Market St., Ephrata, or Ephrata Pioneer Fire Co., 135 S. State St., Ephrata.