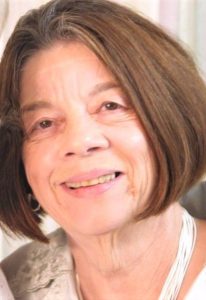 She was born in Williamsport, Pa to the late George and Violet (Clark) Zinzella and was the wife of the late Earl Anthony “Tony” Savant who passed away on Thursday, November 10, 2016.

Mitzi had dedicated her life to the medical field and worked as a Microbiologist at Ephrata Community Hospital for the majority of her career.
She loved spending time with family and friends and enjoyed striking up conversations with strangers attesting to her love for life and compassion for people.

Mitzi would spend free time trying to brighten someone else’s day by volunteering as a Make-A-Wish Foundation clown. Her desire to make people smile was apparent her entire life. During her attendance at Williamsport High School, she was actually voted Class Clown. Also, her and her dog Kimber, a K-Pets certified therapy dog, would visit retirement facilities bringing a bit of joy to the residents.

On a more personal note, Mitzi and her sister Debbie would make their annual migration to Vanity Fair Outlets to purchase new underwear. It was much more than a shopping trip. It was an opportunity to spend time with her sister laughing and carrying on as only those two could. Her compassion did not end with people. She would pick up and nurture stray animals giving them a home full of love.

Mitzi also had a love for adventure which took her to many places around the globe including, France, Germany, Scotland, China, Italy, England and Alaska, to name a few. She shared most of these travels with her beloved husband Tony, which made every adventure that much more enjoyable.

She also enjoyed spending time at home doing activities with her family. Reading, ceramics, cross-stitch, caring for her roses, cooking, and baking were some of her favorites.

Elton John was her all-time favorite performer. She and her daughter Chelsea attended several concerts including his 2018 Farewell Yellow Brick Road Tour where Mitzi was able to sit at his piano before the show, a moment she cherished from that day on.

During family holidays, her claim to fame was homemade Boilo. A few glasses of it and you wouldn’t remember what holiday it was anyway. She was also famous for some sort of experimental pineapple dessert. Some of which were good and some not so.

During her life, Mitzi faced a battle with breast cancer. With the immeasurable moral support of family and friends and the medical professionals who treated her, she became a 30+ year survivor.

In later years, Mitzi was diagnosed with Vascular Dementia. The disease took an enormous toll on her and her family and friends. Again, they all came together to support her in her time of need as she so often did for others. Although she suffered for several years until this horrible disease finally consumed her on November 10, 2022, she never lost her sense of humor or compassion for people. She always had a “Thank You” whenever you would bring her a pillow or blanket to make her more comfortable.

It’s insignificant to say that she will be sorely missed. She was such a positive part of so many lives that the world will be a lesser place without her.
Goodbye for now Mitz and God Bless.

In honor of Mitzi and the brightness she brought to this world, in lieu of sending cards or flowers, please do something for someone else that will brighten their day.

Services will be private at the convenience of the family.

Funeral Home Website
Powered by Ads Pro
Powered by Ads Pro
The Shopping News on Facebook
This message is only visible to admins.
Problem displaying Facebook posts. Backup cache in use.
Click to show error
Error: Error validating access token: The session has been invalidated because the user changed their password or Facebook has changed the session for security reasons. Type: OAuthException