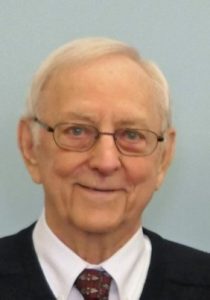 Edgar “Skip” Buohl, 87, of Ephrata, entered the Church Triumphant on Tuesday, May 17, 2022, after a brief illness. Born in Reamstown on October 16, 1934, he was the youngest child of Fridy and Lillian (Fry) Buohl. He was the loving husband of Lorna (White) Buohl, with whom he shared 61 years of marriage.

Skip attended Reamstown schools and served in the U.S. Army from 1957-1959 in the tank division, stationed in Germany.

Skip was a faithful member of Faith United Evangelical Lutheran Church, Denver. His faith was incredibly important to him and he very much looked forward to the fellowship and support of his church family. He was so especially thankful for the care of his pastor, the Rev. Marissa Becklin.

Skip was an athlete and entrepreneur. At a very young age he learned the value of hard work and never shied away from it. He worked for decades in the garment industry, finishing his career running his own business, Skip’s Cutting, a manufacturer of women’s garments. Skip worked hard all his life, often working many jobs at the same time. He also played hard. He loved to compete. He was an avid bowler in his younger years. He was also quite a ball player, most notably a talented pitcher. He played baseball and softball nearly his entire life. One of his most notable goals was to win at least one game as pitcher, after reaching the age of 80. He was pitching for Ephrata’s team in the 60 and over league when he achieved that goal five times over! Skip was a lifelong Phillies fan and in 1993, he was excited to have the opportunity to participate in Phillies Dream Week. In his later years, his ping pong skills made him hard to beat.

Skip lived for competition. He competed in as many different events as he could in the Senior Games every year. Just two weeks before he died, Skip won the corn hole gold medal in the 55-59 age group with his daughter, Lisa. Both of them were elated that they had that opportunity. He adored his daughter and was so thrilled that they had the chance to play together. Skip had a special relationship with his son-in-law, Glenn, with whom he shared his passion for the Phillies and corn hole, and always looked forward to their regular Saturday morning breakfasts. He had a fierce sweet tooth and a sweet disposition to match. He was always upbeat and whistling, often whistling endearing, self-created medleys that made “his girls” smile. Skip had an infectious sense of humor and was a friend to nearly everyone he met; he will be sorely missed by all who knew him.

In addition to his wife, Skip is survived by his daughter, Lisa (wife of Glenn) Beard of Ephrata, as well as a niece and four nephews. In addition to his parents, Skip was predeceased by brothers Phares, Emerson and Elwood, and a sister, Ellen.

A private graveside service will be held at a later date, at the convenience of his family in the Fairview Cemetery, Denver, with a celebration of life service immediately following at the church. In lieu of flowers, please consider donations to the Paralyzed Veterans Association at www.pva.org or Faith United Evangelical Lutheran Church, 357 Walnut Street, Denver, PA 17517.

Arrangements by Roseboro Stradling Funeral & Cremation Services, Inc., Denver. Online condolences can be given at roseborostradling.com.