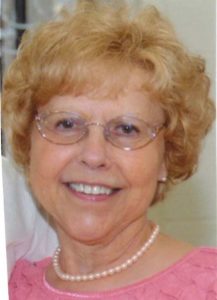 She was born in Ephrata to the late Victor H. and Irma M. (Dissinger) Schlott and was the wife of Parke T. Lesher Jr.

Sharon was a member of the Akron Church of the Brethren. During her working years, she was employed at Science Press and Durawood Stairs. She was an NFL fanatic and followed the Raiders for many years. She was also a major tennis fan.

In addition to her husband, she is survived by two daughters, Sheri, wife of Terry Farrell of Lancaster, and Traci Young of Reinholds; 4 grandchildren; 10 great-grandchildren and a brother, Walter Schlott.

In addition to her parents, she was preceded in death by three brothers, William, Carl and Gene Schlott and a sister, Joanne Sweigart.

Services will be private at the convenience of the family.

Memorial contributions in Sharon’s memory may be made to the Akron Church of the Brethren, 613 Main Street, Akron, PA, 17501.