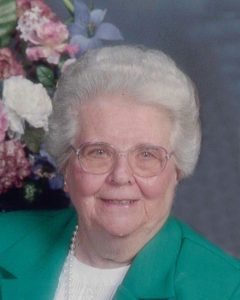 Theresa “Dolly” Elizabeth (Klaster) Youndt, 98, of Garden Spot Village, New Holland and formerly of Fivepointville, passed away Friday, May 20, 2022. Born in Philadelphia, she was the daughter of the late Frank & Rose (Yuhas) Klaster and the loving wife of Lester L. Youndt, until his passing in 2015.

Dolly was a graduate of Frankford High School. She was a homemaker all her life, always caring for her family, and later babysitting the grandchildren whenever she could. Dolly volunteered at the Fivepointville Fire Co. Ladies Auxiliary, the school PTA, and was a Girl Scout troop leader. Dolly was a faithful member of Peace UCC Church in Denver. Later in life, she and Lester moved to a cottage in Garden Spot Village and bought a travel trailer to tour the states. When Lester’s health declined, she was his caretaker until he passed away. She became an avid Phillies fan when she moved to Garden Spot Personal Care, keeping many of the residents informed about the Phillies schedule.

In lieu of flowers, contributions to Vision Corps, www.visioncorps.net.